Making good on their previously announced plans to make same-sex marriage legal in Pennsylvania, out gay state representative Brian Sims and fellow representative Steve McCarter today announced the introduction of H.B. 1686, the Pennsylvania Marriage Equality Act. The announcement was made, quite fittingly, at Love Park in Philadelphia: 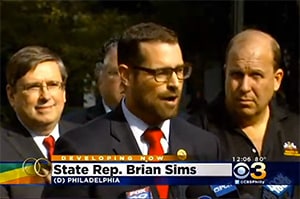 “The majority of Pennsylvanians now support marriage equality, and that support continues to grow,” Sims said. “Neighboring states, including New York, Maryland and Delaware, have all decided to be on the right side of history and have granted equal rights to their LGBT citizens. The time has come for Pennsylvania’s legislature to stand up and let our citizens know we see them as truly equal members of society and they have the right to choose whom they marry.

“With the Supreme Court ruling on the Defense of Marriage Act, it became apparent that Pennsylvania cannot continue to be stuck in the past. This is a civil rights issue facing our LGBT community. Furthermore, this issue is holding back Pennsylvania’s economy. People and businesses are seeing states that have true marriage equality as more attractive to them, and they’re spending their money in those states. This lack of equality is holding us back. Where are we at in our government where you lose rights by crossing a border?”

Sims and McCarter have been gathering co-sponsors and have received bipartisan support for H.B. 1686.

“This goes beyond simply legalizing gay marriage,” McCarter said. “This is about ensuring all Pennsylvanians have equal benefits and protections before the law. Marriage equality and the benefits associated with it need to be afforded to all of our citizens, and the people of Pennsylvania support that idea. The issue is getting our fellow legislators to listen to their constituents and the voice of Pennsylvanians who are calling for this bill to proceed.”

“An ever-growing majority of Pennsylvanians now agree that all consenting adults should be able to make life-long commitments to the ones they love,” said Rep. Dan Frankel, D-Allegheny, co-chairman of the legislature’s LGBT Equality Caucus. “I believe the institution is strengthened when families – gay and straight – can choose the rights and responsibilities of civil marriage.” 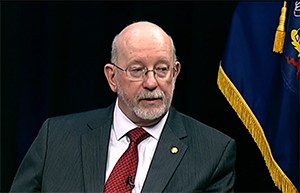 “We’re in a situation now where we’re galvanized,” McCarter added. “The ruling on DOMA made it apparent that marriage equality is the correct direction for Pennsylvania to follow. With a companion bill in the Senate, there is no better time for Pennsylvanians to contact their legislators and tell them now is the time to act. We can no longer afford to sit on the sidelines and watch as the rest of the country evolves to accept what should already be state law.”

The introduction of The Pennsylvania Marriage Equality Act comes amidst a legal battle over same-sex marriage in the Keystone State, stemming from Montgomery County Register of Wills Bruce Hanes’s decision to grant same-sex couples marriage licenses after the U.S. Supreme Court gutted section 3 of DOMA in United States v. Windsor. Though a judge ruled that Hanes must stop issuing licenses to same-sex couples given the state’s ban on same-sex marriage, Democratic county officials are appealing the decision.

Watch a video of Reps. Sims and McCarter making their historic announcement
AFTER THE JUMP…