Prop. 8 proponents continue to fight a losing battle over disclosure of campaign donors, one that at this point seems remarkably silly, according to the court, the SF Chronicle reports: 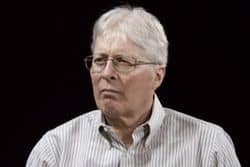 At a hearing Friday before the Ninth U.S. Circuit Court of Appeals in San Francisco, backers of the hotly contested and now-overturned ballot measure, Proposition 8, sought to keep confidential the names of contributors of $100 or more. But members of the three-judge panel quickly pointed out that the identities of Prop. 8's donors have already been released by court order.

"They've got all this information on the Internet. You want us to ignore it?" asked Judge Milan Smith.

"How can this court redress the grievance that you have?" asked Judge Sandra Ikuta.

By ordering the state to remove the names from its website and seal its files, and by granting an exemption for future elections, replied James Bopp (pictured), lawyer for Prop. 8's main sponsors, a conservative religious coalition called Protect Marriage. He said the organization expects to take part in additional "campaigns regarding protecting marriage."

Previous Post: « What To Watch On TV This Week: Bomer’s Back; ‘Runway’ Crowns Winner; ‘Queer Eye’ Guys Reunite
Next Post: Gay Marriage Proposal of the Day: Will and RJ »