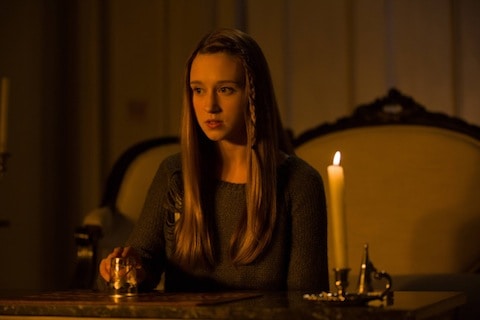 Even though this was an episode with a criminal lack of Jessica Lange, tonight's episode, "The Axeman Cometh," still managed to bring together enough plot points to significantly raise the stakes.

Tonight's episode featured not one, but TWO returns from the dead, plus a huge reveal about one character's true motivations and their unexpected partnership.

Find out what's threatening the extinction of the Salem witches this week, AFTER THE JUMP …

Flashback to the year 1919. Miss Robichaux's Academy for Exceptional Young Ladies was full of young Suffragettes, jazz was sweeping the nation and a lone saxophonist (Danny Huston) was terrorizing the city of New Orleans by hacking apart its residents with an axe and then writing cryptic messages about it in the newspaper.

The axe-wielding murderer, known as the Axeman, had just sent his latest super creepy missive to the papers, threatening to pass through town and murder whomever was not playing jazz. Over at Miss Robichaux's, one plucky young witch was all "Don't you know who I am? I'm Meryl Streep's daughter! a plucky young Suffragette/witch!" So, instead, she cranked the victrola up to 11 and waited for the Axeman's arrival. As she drew the Death Card from her tarot deck, she's quick to point out to the Axeman that the reading she was doing all alone before he arrives was actually for him. Then she and the other witches commenced the stabbing. Stab stab stab stab stabbing until the Axeman was very well perforated and lying in a pool of his own blood. In present times, Zoe (Taissa Farmiga) is just casually unpacking a box in her room full of all kinds of fun knick-knacks, like old magazines, sunglasses and what party would be complete without a tiny pistol? Then, in a wonderful callback to the first season of American Horror Story, a bottle rolls away, leading her to a crawl space. (Fans of season one should know that Farmiga's characters should avoid crawl spaces.) Inside, she locates a Ouija board non-trademarked "Spirit board."

Suddenly emboldened with her fourth-wave witch pride, Zoe rallies Queenie (Gabourey Sidibe) and Nan (Jamie Brewer) to commit to saving the coven and finding out what happened to Madison (Emma Roberts). Queenie is less sold on this whole idea, given non-trademarked "Spirit Boards" have the ability to communicate as well as release the spirits they contact. Nonetheless, the three ladies begin to chat up the Axeman. Before they can even ask for a face pic, Queenie freaks and demands Zoe learns a bit more about who they're dealing with before unleashing them on the land of the living.

Somehow, even after learning all about the Axeman's proclivity for sticking the business end of axes inside other human beings, Zoe is convinced this is still a really good idea to mess with. She offers him release in exchange for the whereabouts of Madison's body. When she finds Madison's decomposing corpse in Spaulding (Denis O'Hare)'s room, the girls interrogate/torture the butler until he faints. Although they used Nan to read his mind, and he details how he killed Madison so that he could do nasty things to her, Zoe still doesn't buy it. 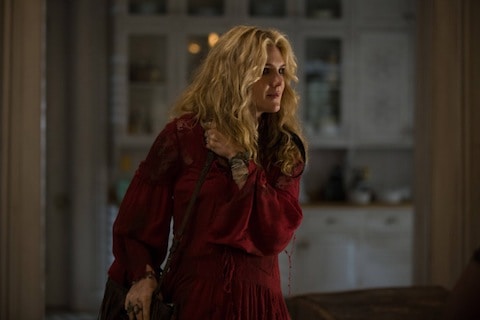 So she enlists the help of Misty Day (Lily Rabe). Having recently been reunited with FrankenKyle (Evan Peters), Zoe whisks them both over to Miss Robichaux's. With Zoe's help, Misty brings Madison back to life, but the young actress doesn't remember who killed her. While she's there, Misty also takes this opportunity to dump FrankenKyle at the Academy where he'll be a safe distance from her very smashable Stevie Nicks records.

Elsewhere in the house, Cordelia (Sarah Paulson) isn't having the happiest homecoming. For starters, her new ability to learn stuff about things she touches wasn't the easiest way to find out about how her Auntie Myrtle (Frances Conroy) was recently barbecued. Then, she's attacked by the spirit of the Axeman, who himself is none too pleased by Zoe's refusal to uphold her end of the bargain and release him. The girls panic and perform a spell, and, next thing we know, the Axeman is walking on out the door.

Of course, he's still got a bit of a … wait for it … axe to grind against the Salem witches. It can't be a coincidence that the first place he goes after his release is an empty barstool next to a very vulnerable post-chemo Fiona (Lange).

If only that was the only pressing threat for the remaining witches. Remember Cordelia's terrible husband, Hank (Josh Hamilton)? And how he got all dom-top on that red head (Alexandra Breckenridge)? And then he got all psychopath murderer? Well, it turns out, it wasn't a dark influence from the fertility ritual, nor was it just your usual garden variety crazy. Instead, it seems he's a witch hunter. He's been contracted by Marie Laveau (Angela Bassett), and he's been using Cordelia as a means to get the inside scoop on emerging witches (like the pyrokinetic ginger we saw him with last). Laveau denies her involvement in throwing the acid that blinded Cordelia, but that hardly matters. The time has come for Hank to bring her the heads of all the remaining Salem witches.

Next week: Fiona's jig is up, and Queenie connects with her roots.

What did you think of the episode? Who do you think threw the acid in Cordelia's face?

Previous Post: « Would You Let This Man Sleep on Your Shoulder on the Subway? — VIDEO
Next Post: Jon Stewart Celebrates the New NYC-Chicago Skyscraper Rivalry: VIDEO »