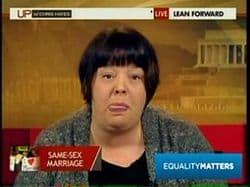 Yesterday, we reported that the Human Rights Campaign had filed a complaint with the IRS to compel the National Organization for Marriage to publicly release financial documents related to its political advocacy spending in 2012. With the reports now published and viewable on their site as a result of the complaint, it appears NOM may have been hiding the information because of the revelation that the organization found itself more than $2.7 million in the red as a result of its political advocacy arm's spending. You'll recall 2012 being a disappointing year for gay marriage opponents, with pro-equality victories in four of the five same-sex marriage ballot measures by year's end. Buzzfeed breaks down more of the reports' findings:

The organization raised nearly $14.5 million in contributions, with the bulk of it – more than $9.4 million – going to the political advocacy arm. The advocacy arm also reported receiving more than $1.6 million in reimbursement of expenses.

The second largest donor to the organization gave $2 million to the educational arm, while another gave a little more than $1 million.