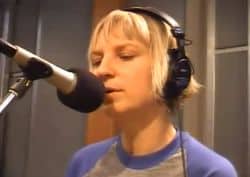 Sia, the out Australian belter most famous for her "Titanium" collaboration with David Guetta, has gotten flack recently for appearing on Eminem's new album.

The rapper, whose songs contain homophobic rhetoric including liberal use of the word "faggot", recently told Rolling Stone: "…the real me sitting here right now talking to you has no issues with gay, straight, transgender, at all."

As a response to the criticism of Eminem, Sia has decided to donate proceeds from their collaboration, "Beautiful Pain," to programs benefiting homeless LGBT youth at the L.A. Gay and Lesbian Center.

Australia native Sia told N.Y. based D.J. and writer Keo Nozari via Twitter that she was under the impression that Eminem’s alter-ego Slim Shady was performance art, and a thing of the past, asserting that she does not believe that Eminem is actually homophobic. But, as AfterEllen pointed out, lyrics off of “Rap God” from The Marshall Mathers LP2 would prove otherwise with hateful sentiments like, “Break a motherf–ker’s table over the back of a couple off faggots and crack it in half,” and “You fags think it’s all a game till I walk a flock of flames off a plank, and tell me what in the f–k are you thinking.”

Sia told Nozari via Twitter, “I guess my only hope at this point is that beautiful pain will do more good than rap god does harm.” She added, “I feel powerless. I thought Slim Shady had been put to bed. Now what’s done is done on my end.”

Listen to "Beautiful Pain," AFTER THE JUMP….

Previous Post: « Gay L.A. Galaxy Player Robbie Rogers Shirtless for the OUT100: PHOTO
Next Post: President Obama: ‘One Party in One House of Congress Should Not Stand in the Way’ of ENDA »