Rolling Stone has excerpted an upcoming cover story on Eminem, a portion of the interview in which they ask the rapper why he still uses the word "faggot" in his lyrics and uses "gay-looking" as an insult. 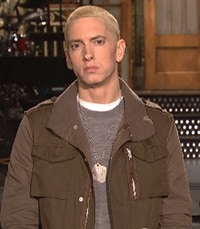 "I don't know how to say this without saying it how I've said it a million times. But that word, those kind of words, when I came up battle-rappin' or whatever, I never really equated those words [to actually mean 'homosexual']…It was more like calling someone a bitch or a punk or a–hole. So that word was just thrown around so freely back then. It goes back to that battle, back and forth in my head, of wanting to feel free to say what I want to say, and then [worrying about] what may or may not affect people. And, not saying it's wrong or it's right, but at this point in my career – man, I say so much s–t that's tongue-in-cheek. I poke fun at other people, myself."

He adds that he personally has no issues with LGBT people:

"…the real me sitting here right now talking to you has no issues with gay, straight, transgender, at all. I'm glad we live in a time where it's really starting to feel like people can live their lives and express themselves. And I don't know how else to say this, I still look at myself the same way that I did when I was battling and broke.

Furthermore, if people don't understand his music by now "I don't think there's anything I can do to change their mind about it."

Previous Post: « A Summary of Gay Marriage News from HI, IL, TX, VA, OH, CO, PA, and MO: VIDEO
Next Post: Religious Exemptions in ENDA Endorsed by Some Activist Groups, Questioned by Others »