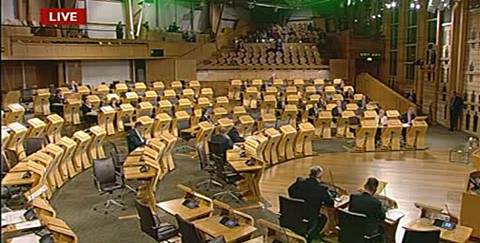 Scotland's parliament is set to take its first vote on marriage equality today, the BBC reports:

The Scottish government's Marriage and Civil Partnership Bill is likely to be backed in principle, when MSPs vote on it for the first time. Ministers said the move was the right thing to do but the Church of Scotland and Catholic Church are opposed. Under the bill, religious and belief bodies would need to "opt in" to perform same-sex marriages. Individual celebrants who felt it would go against their faith to carry out same-sex weddings would also be protected, and the Scottish government has insisted no part of the religious community would be forced to hold ceremonies for homosexual couples in churches. MSPs are being allowed a free vote on the legislation, rather than along party lines.

Same-sex couples in Scotland currently have the option to enter into civil partnerships, and there has been an indication that the earliest gay marriage ceremonies could take place by the start of 2015, if the legislation is passed. The bill was brought forward after a Scottish government consultation, which produced a record 77,508 responses.

You can watch the vote live  starting at approximately 12:05 pm ET.

Watch LIVE (opens in new window), AFTER THE JUMP…