Back in the summer of 2012 we reported on Denver’s Masterpiece Cake Shop and its refusal to bake a wedding cake for a gay couple. The bakery’s owner Jack Philips said he would close up shop rather than be forced to bake a gay wedding cake.

Phillips is being sued and the case is going before the court this week, KDVR reports:

A judge will decide if Jack Phillips violated discrimination laws—by refusing to bake a wedding cake for a gay couple last summer.

Dave Mullins and Charlie Craig couldn’t believe it when Phillips refused them service. They got angry. And they didn’t let it go. Now, they’re hoping to force Phillips to change what they say is a discriminatory policy.

“Being discriminated against is a form of personal invalidation. It’s being degraded and put on a lower level than other people in society,” says  Mullins about how humiliated he and Craig felt on July 19, 2012, when Phillips of Masterpiece Cakeshop told them his business doesn’t make cakes for gay weddings. He says Colorado doesn’t recognize same-sex marriages. And also that they’re (gay relationships) against his religious beliefs.

“I am a follower of Jesus Christ. So you could say it’s a religious belief. I believe the Bible teaches it’s not an OK thing,” is what Phillips told us last July.

Watch their new report on the case, AFTER THE JUMP… 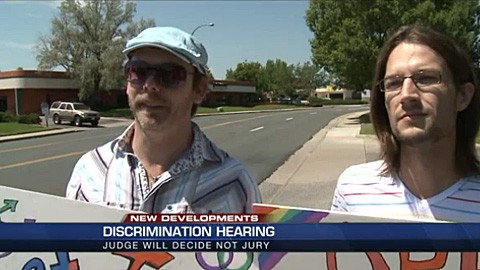