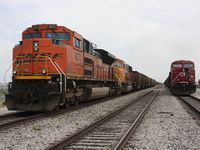 The National Railway Labor Conference, which represents the major railroad companies in the U.S., announced last week that they will begin providing health care benefits to same-sex spouses of their employees. The decision came a day after legally married, gay employees in Washington filed a federal lawsuit against the company, alleging violations of the federal Equal Pay Act. ABC News reports:

Same-sex spouses will be eligible for dependent health care coverage starting Jan. 1, the statement said. "While this is not a benefit required by law or under current collective bargaining agreements, the railroads agreed with labor to provide the benefit in light of recent changes allowing same sex couples to access same federal tax benefits provided to other married couples," the conference said.

Cleveland Stockmeyer, lawyer for the gay couples, said that the company's health plan describes eligible dependants as "your husband or wife," without expressly excluding same-sex spouses. He argued that in addition to health care benefits, the couples also need to be compensated for the emotional and financial toll of spending months without benefits while fighting the company to have their spouses added.

"It shouldn't take a federal lawsuit to make a national company do the right thing," Stockmeyer said. "If they tell me or my clients the benefits will be offered, and if they actually do it, we'll believe it. But they still need to account for denying them benefits for one year."