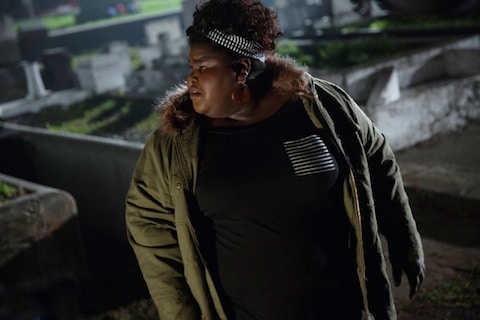 Now that Queenie (Gabourey Sidibe) is back at Miss Robichaux's, she's a little unnerved by the sudden disappearance of the only other black witch around, Marie Laveau (Angela Bassett). Her independent investigation leads her to Cordelia's greenhouse where she finds an awfully troubling pool of blood and the disembodied voice of Laveau.

If she can't get Laveau back (which I'm unclear why that's not option, since she stitched together LaLaurie, and the girls created Evan Peters' FrankenKyle), she wants revenge on LaLaurie. She pulls out her secret magic diary, does a little naptime reading and drifts off to sleep in hopes of meeting up with Papa Legba (Lance Reddick). Once she drifts off, she finds herself in her personal hell (descensum). It's her old chicken joint, with a line of obnoxious customers out the door and Papa Legba waiting at the counter.

He explains to her that working at the chicken shack was the worst time in Queenie's life. It's impressive that she's made it down there, but she'll need to hurry to get back. Gotta hand it to Queenie, she got herself back to the real world, and Papa Legba's waiting for her. He shows her Laveau being hacked apart by LaLaurie (Kathy Bates) and sprinkled all over the city, like powdered sugar over a beignet.

Suddenly, Queenie displays her most powerful act yet — that of Queenie, Esq. highly-regarded, seasoned Voodoo contract lawyer. Legba tries to tell her that as long as Laveau is alive (in any form), LaLaurie cannot be killed. Queenie objects, going full-blown ADA Cabot, and explaining that since Laveau cannot fulfill her obligation to serve Legba, she's in breach and therefore should be mortal. Ipso facto, Laveau should be dead and LaLaurie should be killable. Case dismissed!

Speaking of LaLaurie, what's she been up to? Well, she's been busy launching her new career as a tour guide at LaLaurie's old home. She snuck into a tour, lured the former guide upstairs and took her out with a bonk on the head. Then, she updated her look, took up the tour guide mantle and started setting the record straight about her legacy. She wasn't a murderer, she was a visionary! She was a renowned hostess and equestrian! The attic was for storage and the humane, though sometimes necessary, correction of her "domestics."

Queenie finds her after a tour and tries to give her a shot at redemption. Maybe it was her recent visit to hell, but she naively posits that LaLaurie can atone for her sins by volunteering. Then, ugh, Ryan Murphy indulges in one of his typical, ham-fisted social commentary moments by somehow connecting LaLaurie's lack of regret to the recent Paula Deen, Anthony Weiner and Eliot Spitzer scandals. Somehow, those figures' public meltdowns only further entrenched LaLaurie's stubbornness. It's an extremely tenuous connection, a desperate attempt to force a message, and it felt so, so contrived.

LaLaurie is an irredeemable monster. It's that simple. She is not a product of a post-Lewinsky age. She is not inspired by Paula Deen. And, while we're at it, are we just lumping racism and sexting scandals together now? Are those things the same? Was there not enough real racism to pull from? Not to belabor the point, but oh, brother.

ANYWAY, with no hope for LaLaurie, Queenie sends her straight to hell with a knife to the heart.

Rest in … actually, peace seems like an unattainable state for LaLaurie in the afterlife. Papa Legba's got her locked up in her attic of horrors, just out of reach from her imprisoned daughters. Their tormenter is Laveau, doomed to torture LaLaurie and LaLaurie's innocent daughter for all eternity. This is a fate Laveau doesn't think she deserves, but Legba reminds her of all the babies she brought him over the years.

Also, I've got a small bone of contention here. How come Laveau has a problem torturing LaLaurie's daughter, but had no such qualms murdering her by hanging in the first place? I get that torturing anyone for all eternity doesn't seem attractive, but this is hell, what do you expect? I was just a little thrown by her aversion to harming an innocent. 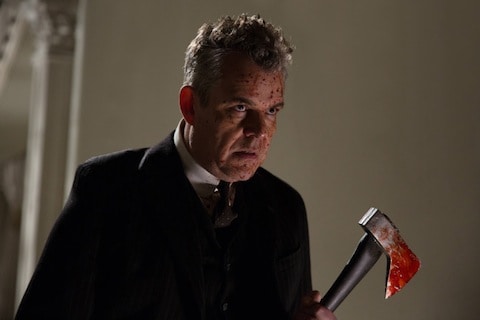 Fiona (Jessica Lange) is full of ennui. She's getting her portrait painted and sighing heavily. She's barely got the energy to argue with Myrtle Snow (Frances Conroy) over the flowers in the background. She goes upstairs to pack her things, but she's interrupted by Cordelia (Sarah Paulson). Ready for a fight, Fiona surprises her daughter with kindness and a little speech about how Delia's power can't be taken away and wasn't given to her by her mother. It's all very sweet, until Fiona gives Cordelia a necklace from her own mother. Once it touches Cordelia's skin, she immediately knows that Fiona is saying goodbye. After Fiona fastens it around her neck, Cordelia has a vision of all the young witches in the Coven slaughtered, including her, and her mother taking the necklace off her dead body.

Convinced Fiona is going to kill them all, Cordelia visits Fiona's boyfriend, the Axeman (Danny Huston). She tells him that Fiona is leaving town, and he's not invited. Was he really so delusional to think that she was going to settle down with some "half-decent musician in a $12 suit?" He tries to convince her that their love is different, but you can tell he's second-guessing things. She warns him that the empty, broken-hearted feeling he's having is what it's like to get close to Fiona.

Cordelia and Queenie have been all kinds of busy, actually. In addition to bringing some kind of justice to LaLaurie and squashing the Axeman's puppy-love dreams, Queenie's helping Cordelia find Misty Day (Lily Rabe). Delia's second sight isn't 100 percent back and working properly, but she's able to ascertain Misty's location in the graveyard. Queenie uses her power of telekinesis to rip the casket from the tomb, and then vitalum vitalis to bring Misty back to life. (Misty, for reasons left unexplained, was not able to resurrect herself this time as she did when she was burned at the stake.)

She's not the only one to make a reappearance. Zoe (Taissa Farmiga) and Kyle (Evan Peters) are back from their quick jaunt to Florida. Kyle had a little run-in with a homeless man that ended with the man just a little bit dead. Zoe manifested her vitalum vitalis, brought him back to life and realized she belonged back with the Coven.

They show up just before Misty Day comes tearing through the house on a rampage for Madison (Emma Roberts). I guess she's got some hard feelings for the whole being entombed alive thing. Misty just starts beating the hocus pocus out of Madison, rumbling all throughout Miss Robichaux's. The rest of the students are happy to watch the fight unfold, but it's interrupted by a crazed, bloodied Axeman.

But whose blood is it?

It's Fiona's! He found her plane ticket and confronted her. Once the jig was up, she was pretty cavalier about the whole affair and how he was just a good time when she needed it. Heartbroken, he took her down with his axe and then fed her to the alligators. Apparently, once you've passed through a gator, there's no coming back.

That leaves a very troubled Axeman vastly outnumbered amongst a very hostile coven. Kyle, acting as the house's guard dog, volunteers to kill the Axeman, but Madison grabs the axe. Misty reminds Kyle that they don't need a man protecting them. Then Misty, Queenie and Zoe all use telekinesis to get knives and start stabbing the Axeman. United, finally (if only briefly), the coven destroys the Axeman.

After hanging Fiona's portrait in the parlor, Cordelia announces that they will all perform the Seven Wonders to declare Fiona's successor.  A new Supreme must be found!

So, what did you guys think? I'm super excited for next week's finale.

While I thought that forced bit of social commentary cheapened LaLaurie's arc a bit, I was pretty satisfied with her death overall. I'm glad it was Queenie who carried it out, and I thought her unique hell was fitting for the character's history and crimes. I also feel like she and Laveau have been inextricably linked this whole time, so it makes sense for them to remain that way eternally.

While no one can replace Fiona in my eyes, I also found her death appropriate. Her daughter played a role in her demise, outsmarting her mother (or at least being a bit more of an opportunist than her). Even if Cordelia doesn't succeed Fiona as Supreme, she took a stand and manipulated the Axeman in a manner that would make her mama proud. It felt like an appropriate end for Fiona's selfishness and thoughtlessness to lead to her ultimate undoing.

Then there's the remaining witches in the coven. A big theme this season has been around how minority groups often harm themselves with infighting. Tonight's brawl between Misty and Madison, while awesome (seriously, Emma Roberts, commits), was an interesting physical culmination of all the scheming and backstabbing we've seen all season. It made it all the more powerful when the girls united against the Axeman.

I'll be breaking down some theories on who the next Supreme will be next Wednesday before the finale airs, but share your thoughts in the comments!