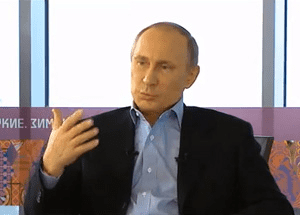 Over the weekend in a defense of the country's tolerance (cough) of homosexuality, Vladimir Putin told reporters that "Elton John is an outstanding person [and] outstanding musician. Millions of our people sincerely love him despite his orientation." 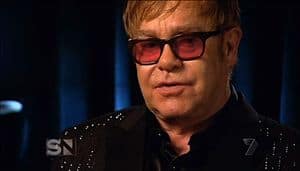 Now Elton John is responding to Putin's remarks, saying he is "deeply grateful" for the support of the Russian people, and offering to introduce Putin to gay people.

Elton released a statement on his website which reads, in part:

The people I met in Moscow – gay men and lesbians in their 20′s, 30′s and 40′s – told me stories about receiving threats from vigilante groups who would ‘cure’ them of homosexuality by dousing them with urine or beating them up. One young man was stalked outside a gay club by someone posing as a taxi driver who tried to garrotte him with a guitar string because he was a “sodomite”. Everyone shared stories of verbal and physical abuse – at work, in bars and restaurants or in the street – since the legislation came into force last June. And, some of the vital work providing HIV prevention information to the gay community has been labelled “homosexual propaganda” and shut down.

It was very clear to me that, although foreigners like myself who are visiting Russia are not affected by this new law (and President Putin has recently confirmed this), it is a very different story for those living inside the country. As Maria Maksakova told her fellow Russian MPs last month: “We are seeing extremely negative consequences as a result of this law, with the growth of hate crimes.”

President Putin asserts that this was not the intention, but it is undoubtedly the effect that this law has had by promoting misunderstanding and ignorance. In particular, it is very disappointing that the law explicitly links homosexuality with child sex abuse, which countless studies have shown to be conclusively wrong.

The people I met in Moscow were decent, kind, patriotic men and women who had no thought of forcing their sexuality on anyone. Whatever the intention of Russia’s homosexuality and paedophilia propaganda laws, I am absolutely clear from my own personal experience that it is proving deeply dangerous to the LGBT community and deeply divisive to Russian society. I would welcome the opportunity to introduce President Putin to some Russians who deserve to be heard, and who deserve to be treated in their own country with the same respect and warm welcome that I received on my last visit.

Previous Post: « Gay Houston Mayor Annise Parker Rips GOP Attacks on Her Marriage: ‘Get Over It’ —VIDEO
Next Post: Ellen Welcomes ‘The Cream Pies’ to Her Show: VIDEO »