The latest issue of IKEA FAMILY LIVE, the Swedish furniture store's magazine to their customers, featured an article on lesbian couple Kirsty and Clara who live with their daughter in England and was seen in 24 of the 25 countries where the magazine is distributed. The holdout was, of course, Russia where the anti-gay "propaganda" laws have made it a crime to be published. 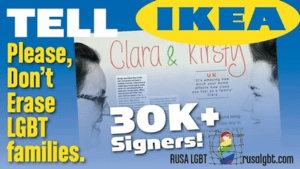 RUSA LGBT, a group of Russian-speaking LGBTQ Americans, started a change.org petition to protest the "erasure" of LGBT families and presently have over 45,000 signatures. The delivery of these signatures to the IKEA offices in Conshohocken, PA was enough to get the attention of IKEA Policy & Compliance Manager Greg Priest who posted a public statement in the online issue of IKEA FAMILY LIVE and on the Change.org petition which states that states in part (bolding mine):

We are guided by our vision – to help create a better everyday life for the many people.  We also believe you can be yourself as an IKEA co-worker, an IKEA customer or in your home. We do our best to stand for equal opportunities and support the human rights of all people. And every co-worker can expect fair treatment and equal opportunities whatever their ethnicity, religion, gender, physical ability, sexual orientation or age.

Because of the online nature of the digital version of the magazine even subscribers in Russia will see IKEA's explicit support of LGBT customers and employees.

Previous Post: « The New Gay-Themed Teen Comedy ‘Date and Switch’ is a Celebration of Bro Bonding: TRAILER
Next Post: Andy Murray and Grigor Dimitrov Have an Ice Bath Together After the Australian Open: PHOTOS »