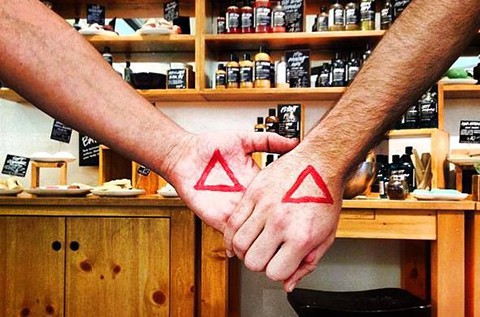 The cosmetics company Lush has announced a new campaign directly aimed at speaking out against anti-LGBT discrimination in Russia. With the Sochi games set to start on February 7, Lush hopes to keep attention on the country's anti-gay propaganda law that criminalizes the promotion of "non-traditional sexual relations" to minors. The Independent reports:

In its Valentine’s campaign, to be launched tomorrow, Lush’s stores will display signs proclaiming “We believe in Love”. Staff will also encourage customers to paint pink triangles on their bodies as a symbol of support for equal love. Yet the campaign, a response to Russia’s anti-gay legislation, would be at risk of violating the country’s “homosexual propaganda” law if the signs appeared in any of the retailer’s 63 Russian shops…

“Valentine’s Day is the perfect to time to stand up [for] everyone’s right for love. No country, company, or individual can stop love; all they can do is punish people for that love,” said Tamsin Omond, head of Lush campaigns. “To do so – to forbid or criminalise love – is unnatural and cruel, so I am proud that we are standing in solidarity with LGBTQ people and campaigning for equal love.”

Activist Peter Tatchell was quick to point out the disparity between the position taken by Lush and the corporate sponsors of the 2014 Olympics:

Lush’s “proactive stand” contrasts “with the silence and inaction of Winter Olympics sponsors like Coca Cola, McDonald’s and Visa. They have shown great cowardice by refusing to make any public statement criticising Russia’s anti-gay laws and the escalating levels of homophobic violence in Russia.”

Lush has also taken to social media site Pinterest, calling on people to upload photos of themselves marked with the sign of love to show support for LGBT people in Russia and to sign a petition started by LGBT rights organization All Out that "urge[s] leaders around the world and within Russia to work to eliminate all anti-gay laws and protect all citizens from violence and discrimination in Russia."