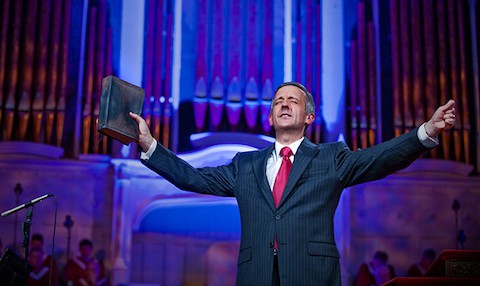 Dallas megachurch pastor Robert Jeffress has written a new book about spiritually preparing for the end times and the second coming of Jesus entitled Perfect Ending: Why Your Eternal Future Matters Today, which presently has a perfect 5-star rating on Amazon due to the dozen or so laughably obvious plants who have only reviewed Perfect Ending or only books by Jeffress.

And the reason that Jeffress is convinced that the end times are coming, beyond it being the standard fetish for evangelical preachers? Obama, of course. And gay marriage. In his book he writes:

For the first time in history a president of our country has openly proposed altering one of society’s (not to mention God’s) most fundamental laws: that marriage should be between a man and a woman. While I am not suggesting that President Obama is the Antichrist, the fact that he was able to propose such a sweeping change in God’s law and still win reelection by a comfortable margin illustrates how a future world leader will be able to oppose God’s laws without any repercussions.

So because Obama has taken his own steps to allow gay couples to be legally-recognized in the U.S., the path has been cleared for an easy takeover by the antichrist. That's not the least bit insane.