Four couples who filed suit in Idaho in November challenging the state's gay marriage ban have requested that the federal judge overseeing the lawsuit strike down the ban without a trial, saying the overwhelming rulings in other parts of the country make it clear that Idaho's ban violates the Constitution, the AP reports: 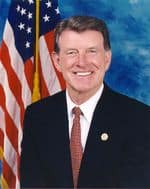 Gov. Otter (pictured) contends that Idaho's laws banning same-sex marriage are vital to the state's goal of creating "stable, husband-wife unions for the benefit of their children."

"Common sense and a wealth of social-science data teach that children do best emotionally, socially, intellectually and even economically when reared in an intact home by both biological parents," Otter's attorneys wrote in the court filing.

The women contend Otter's stance has no basis in reality and say the state's ban on gay marriage is nothing more than discrimination based on gender and sexual orientation. After all, they argue, banning same-sex marriage and denying the children of same-sex couples the same legal protections given to children of married heterosexual couples does nothing to encourage heterosexual couples to procreate or become better parents.