After Judge Timothy Black's ruling in December, which ordered Ohio officials to recognize same-sex marriages on death certificates despite the state's 2004 ban on such unions, four couples have been inspired to fight for their, and their children's, rights. 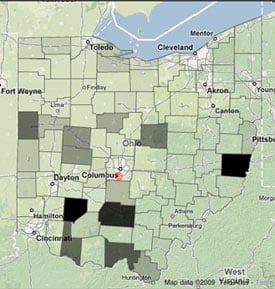 The couples, all of whom were legally married in other states but have ties to Ohio through their children, or soon-to-be-born children, filed a lawsuit against the state to have their marriages recognized on birth certificates. They stated that being forced to list only one parent is a violation of their rights according to the U.S. Constitution.

"We want to be afforded the same benefits and rights as every other citizen of the United States," said one of the plaintiffs, Joe Vitale, 45, who lives in Manhattan with his husband and their adopted 10-month-old son, who was born in Ohio. The pair married in 2011 shortly after New York legalized gay marriage.

Rob Nichols, a spokesman for Republican Gov. John Kasich, said his office doesn't comment on pending litigation, "except to say that the governor believes marriage is between a man and a woman."

A spokesman for Ohio Attorney General Mike DeWine, whose office will fight the lawsuit, declined to comment.

The other plaintiffs in Monday's lawsuit are three lesbian couples living in the Cincinnati area who married in states that have legalized gay marriage. One woman in each of those marriages is pregnant through artificial insemination, and their babies all are due to be born this summer in Cincinnati hospitals.

The couples fear that certain parental rights could be denied them later on should both names not be listed on the birth certificates. They are being represented by Al Gerhardstein, the attorney who sought the December court order regarding death certificates, which is now being appealed by the state.

"At both ends of our lifespans, a marriage is a marriage. A family is a family," said the couples' lawyer, Cincinnati civil rights attorney Al Gerhardstein. "A family is a loving, nurturing group of people and the identification document when the children come along is the birth certificate, and it ought to be right."

Best of luck to the four couples and their children. We will keep our fingers crossed.

Previous Post: « Jonathan Vilma Clarifies His Concerns About Gays Looking at Him in the Locker Room: VIDEO
Next Post: Thousands March in Raleigh, NC for Equality, Push Back Against Republican Legislature: VIDEO »