Last month, Desmond Tutu spoke to Ugandan President Yoweri Museveni urging him to not sign the heinous "kill the gays" bill. Tutu released a statement today wherein he expressed his disappointment regarding news that the leader is still considering signing the bill into law. 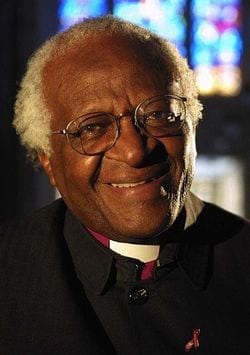 "When President Museveni and I spoke last month, he gave his word that he would not let the anti-homosexuality bill become law in Uganda. I was therefore very disheartened to hear last week that President Museveni was reconsidering his position….We must be entirely clear about this: the history of people is littered with attempts to legislate against love or marriage across class, caste, and race. But there is no scientific basis or genetic rationale for love. There is only the grace of God. There is no scientific justification for prejudice and discrimination, ever. And nor is there any moral justification. Nazi Germany and apartheid South Africa, among others, attest to these facts."

Tutu suggests Museveni focus not on homosexuality but instead actual crimes occurring in Uganda:

Just last week, Museveni asked that Uganda work with the United States to gather more information about gays and lesbians.