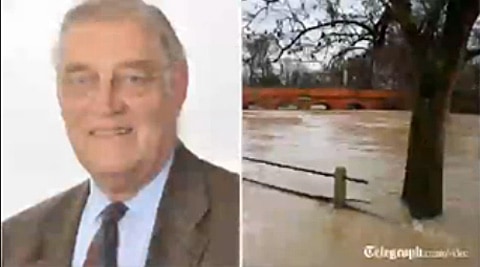 Henley-on-Thames town councillor David Silvester, who was suspended from the UK Independence Party in January for remarks linking the passage of gay marriage to recent storms and flooding, has now been expelled. Silvester has had a publicly homophobic outlook since the UK's same-sex marriage bill was on the table in 2012 when he wrote to Prime Minister David Cameron warning him "that disasters would accompany the passage" of the bill. In fact, in a delicious bit of irony, Silvester defected from the Conservative party and joined the UKIP as a protest against Cameron's pro-gay message.

Last month, Mr Silvester's house was targeted by protesters, who threw eggs at the property and attached a "rainbow banner" to the wall.

In the letter to the Henley Standard he wrote: "The scriptures make it abundantly clear that a Christian nation that abandons its faith and acts contrary to the Gospel (and in naked breach of a coronation oath) will be beset by natural disasters such as storms, disease, pestilence and war."

Silvester also claimed that Cameron ignored the will of the "Christian nation."

"But he went ahead despite a 600,000-signature petition by concerned Christians and more than half of his own parliamentary party saying that he should not do so.

"It is his fault that large swathes of the nation have been afflicted by storms and floods."

He went on to say no man, however powerful, "can mess with Almighty God with impunity and get away with it."