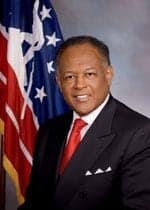 Democrats in Virginia will be electing a new party chair next week, and prospect Richmond Mayor Dwight Jones is causing a rift in the party over his stance against marriage equality. Presently 71 Central Committee members and 40 local party officers have all signed a petition asserting, “Unless Mayor Jones makes a strong public statement in support of legal marriage equality, we cannot consider supporting him.”

Jones, a Baptist pastor, has expressed his support for general LGBT equality but draws the line at marriage due to his religious beliefs and the Baptist denomination's opposition to marriage equality. In 2006 Jones voted for the constitutional amendment banning the recognition of all same-sex relationships and encouraged the federal government to do the same, distancing himself from supporting Obama after the President endorsed marriage equality.

An anonymous insider said that the anti-LGBT members within the Democratic party are "our Tea Party."

Previous Post: « Julian Assange Calls for Public Action to Defend Against ‘Rogue’ NSA
Next Post: Shirtless Obama Stands Up to Putin with the Help of Liam Neeson in SNL Cold Open: VIDEO »