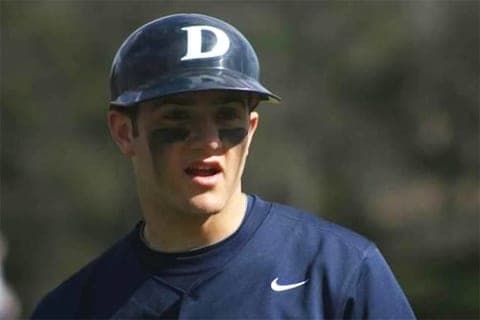 Visibility of gay athletes increased one notch further last Sunday as Matt Kaplon, baseball player for and student of Drew University, came out of the closet to his teammates. Inspired by the story of gay NCAA basketball player Derek Schell, Kaplon credits him with saving his life and said of his own coming out,

Everyone tells me that college is supposed to be the best four years of my life. I've had a great time, but for three and a half of them, I've been hiding things and not being the real me. Building friendships and meeting people and with my teammates, they know part of me but I finally feel like I want them to know everything. I want to be me 100% and make sure they know I'm not hiding anything. I'm ready for that. I'm ready to start not having to hide.

Kaplon was welcomed warmly by his team and congratulated on his decision to come out. Even his coach, Brian Hirschberg, was proud of him.

He's as close to a family member as anyone I've ever coached. He's like a younger brother to me. When Matt shared his story with me, I respected him more, if that's even possible.

Previous Post: « NBA to Donate Proceeds from Jason Collins Jerseys to LGBT Groups
Next Post: A Small Town Guy Finds his Way Around Gay Toronto in the New Web Series ‘Other Men’: VIDEO »