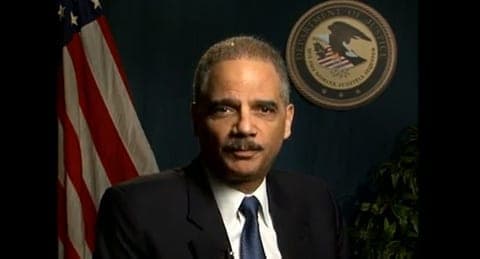 Today US Attorney General Eric Holder announced that the federal government will recognize gay marriages performed in Michigan after the landmark ruling by District Judge Bernard Friedman (a Reagan appointee) which found that state’s ban on same-sex marriage to be unconstitutional, according to Freedom to Marry:

I have determined that the same-sex marriages performed last Saturday in Michigan will be recognized by the federal government. These families will be eligible for all relevant federal benefits on the same terms as other same-sex marriages. The Governor of Michigan has made clear that the marriages that took place on Saturday were lawful and valid when entered into, although Michigan will not extend state rights and benefits tied to these marriages pending further legal proceedings. For purposes of federal law, as I announced in January with respect to similarly situated same-sex couples in Utah, these Michigan couples will not be asked to wait for further resolution in the courts before they may seek federal benefits to which they are entitled.

You’ll recall that earlier this week Michigan Governor Rick Snyder remarked that the state would not “recognize the benefits of the [gay] marriage[s] until there’s a removal of the stay.” The stay in question halted gay marriage in the Great Lakes State and was granted by the 6th circuit court of appeals shortly after Judge Friedman’s ruling was given. That ruling will now be subject to the 6th circuit’s jurisprudence.

Holder previously announced a similar decision regarding couples married in Utah who found their marriages in legal limbo like their brothers and sisters up north in Michigan now do.