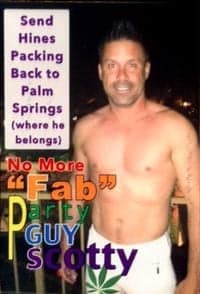 In mid-February, some Rancho Mirage voters opened their mailboxes to find an anti-gay postcard attacking openly gay Councilmember Scott Hines with the message “Send Hines Packing Back to Palm Springs (where he belongs).”

The postcards feature a shirtless picture of Hines with a caption in rainbow-colored lettering that says “No More ‘Fab’ Party Guy Scotty.” The letters of the message line up vertically to spell out “FAGS.”

The mailing was sent out without a return address, so no one knows who sent it. Hines, an educational technology company CEO and former Air Force Intelligence officer, has been careful not to point any fingers, but many residents suspect the postcards came from his campaign opponents, a group Hines sometimes refers to as “The Gang of Four.”