Today it was announced that Ellen Page will be presenting GLAAD's highest honor award to 'Orange is the New Black' star Laverne Cox at the 25th Annual GLAAD Media Awards in LA on April 12. 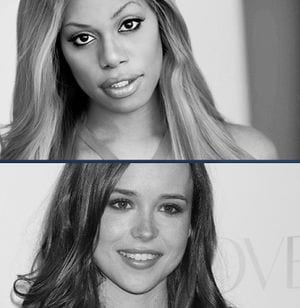 Cox will receive GLAAD's Stephen F. Kolzak Award, which is presented to an openly lesbian, gay, bisexual, or transgender media professional who has made a significant difference in promoting equality. The award is named after a successful casting director, who devoted the last part of his life to raising awareness in the entertainment industry about the discrimination faced by LGBT and HIV-positive people. Previous Stephen F. Kolzak honorees include Wanda Sykes, Rufus Wainwright, Melissa Etheridge, Bill Condon, Todd Haynes, Alan Ball, Ellen DeGeneres, and Sir Ian McKellen. […]

"Laverne Cox has reshaped the way Americans see transgender people and raised the bar in diverse representations of the LGBT community in entertainment," said GLAAD President & CEO Sarah Kate Ellis. "She is not only a talented actress, but a truly transformational leader in the LGBT equality movement. Through her tireless commitment to building understanding and acceptance through education and advocacy, Laverne is moving equality forward both on and off the screen."

Page named Cox as one of her inspirations when she came out as gay at an HRC conference last month.