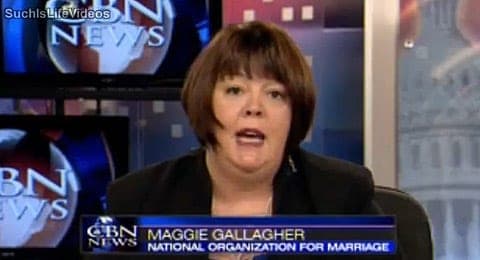 In an exchange that really crystallizes the tremendous progress gay rights has made, National Organization for Marriage founder Maggie Gallagher shared her thoughts with The Huffington Post about losing the marriage battle, writing "I have a lot more freedom now to figure out what I want to do with the next 20 years of my life."

I went into this fight, in good conscience, because I believed it mattered and that I had something to contribute. I did not promise myself I would win. I promised myself I would do everything I could see, to do this good, to fight for marriage as a universal human institution with certain goods and goals. I feel a great deal of contentment about that. I can see some things I might have done differently, but basically I was at post. One cannot do anything better with one's life than stand up for what you deeply believe in, i.e, to speak truth, whether in power or to power.

Gallagher acknowledged that nationwide marriage equality is on the horizon and said social conservatives will ultimately need to reformulate the role they play in society:

As I said last summer, it was clear to me from reading Windsor [the U.S. Supreme Court decision in United States v. Windsor], gay marriage advocates now have five votes for inserting a right to gay marriage in our Constitution. We are now in the 'gay marriage in all 50 states' phase whether we like it or not. What's next? In my view people who believe in the traditional understanding of marriage, and believe that it matters, have to become a creative minority, finding way to both express these sexual views, culturally, artistically and intellectually and to engage with the newly dominant cultural view of marriage respectfully but not submissively.

She went on to share her thoughts on religious exemption legislation like the failed proposal in Arizona and why she thinks there has been a such a dramatic shift in public opinion among religious groups regarding LGBT rights.

You can check out the full, fascinating interview HERE.