Convicted Wikileaker Private Chelsea Manning has petitioned a Kansas court for a legal name change to match her female identity. The day after she was sentenced to 35 years in prison for violating the Espionage Act, Manning released a statement announcing her transgender identity. 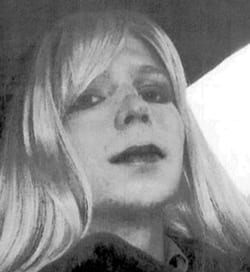 Manning is seeking the name change as part of a longer battle to secure hormone therapy during her time in incarceration. The New York Times has more:

Manning has asked to receive hormone replacement therapy and live as a woman while incarcerated… [and] will go to court, if necessary, to obtain the hormone treatment.

Civilian federal prisons are required to provide such treatment, if deemed medically necessary, for inmates diagnosed with gender dysphoria. Unlike in military prisons, the policy also allows inmates who believe they are the wrong gender to dress and live accordingly as part of their individual treatment plans.

The military has said it does not provide treatment for gender dysphoria because Pentagon policy dictates that transgender soldiers are not allowed to serve.

According to Lauren McNamara (aka Zinnia Jones) — an activist, friend and former defense witness for Chelsea Manning — civilian courts have found in almost all cases that prisons are required to provide hormone therapy and increasingly surgery as well for trans inmates. If Manning succeeds in her quest to receive hormone treatment and other trans accomodations, she could help set a precedent for future trans soldiers both in and out of prison.