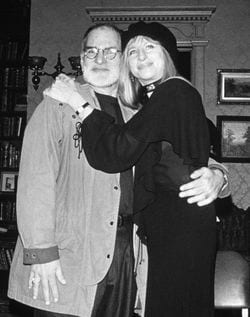 With the HBO adaptation of Larry Kramer’s play The Normal Heart due out next month, Barbra Streisand is speaking out about charges leveled against her by Kramer, namely that she is to blame for a film version of the play not being made sooner, even going so far as to call her a ‘hypocrite’ on gay rights. Streisand told The Hollywood Reporter:

In the press, Larry kept speaking out against me. But I think it's unfair to keep blaming me for the movie not getting made. I worked on it for 25 years, without pay. Larry had the rights for the last 15 years and he couldn't get it made, either. Those are the facts.

In 2007, he sent me a note before giving the project to another director, asking me again if I wanted to direct it — but only with his screenplay. As a filmmaker, I couldn't have my hands tied like that. What if I needed changes? Sadly, I turned his offer down and wished him well.

I will always believe in Larry's play and its powerful theme about everyone's right to love. It's been 28 years since I tried to get this piece made … so much has happened since. But I'm glad it's finally here.

Kramer has previously accused Streisand of re-working the play to focus on the character of the doctor, whom she was originally set to play, marginalizing the gay characters. For her part, Streisand has said that Kramer’s script was not cinematic enough and refused to be tied down artistically by his draft. The HBO version, which stars Matt Bomer, Taylor Kitsch, Jim Parsons, and Mark Ruffalo among others, was directed by Ryan Murphy and premieres May 25th.