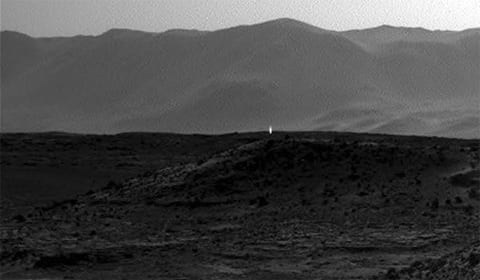 Like the Tusken Raider-shaped rock, the 'alien skull', the 'metallic object', the 'jelly doughnut', the famous 'face', and of course, the martian canals that came before it, a photograph this week which appeared to show a column of light shooting up from the red planet gave hope to conspiracy theorists everywhere that a secret Martian civilization was living just beneath the planet's surface:

Waring noted that the light shines upward, as if from the ground, and is very flat across the bottom.

"This could indicate there there is intelligent life below the ground and uses light as we do," Waring wrote on his website. "This is not a glare from the sun, nor is it an artifact of the photo process."

The rover took the image just after arriving at a waypoint called "the Kimberley." The bright spot appears on a horizon, in the same west-northwest direction from the rover as the afternoon sun.

"In the thousands of images we've received from Curiosity, we see ones with bright spots nearly every week," said Justin Maki of NASA's Jet Propulsion Laboratory, Pasadena, Calif., leader of the team that built and operates the Navigation Camera. "These can be caused by cosmic-ray hits or sunlight glinting from rock surfaces, as the most likely explanations."

If the bright spots in the April 2 and April 3 images are from a glinting rock, the directions of the spots from the rover suggest the rock could be on a ridge about 175 yards (160 meters) from the rover's April 3 location.