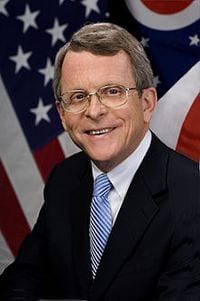 The language for a proposed ballot initiative aimed at overturning Ohio’s constitutional ban on same-sex marriage has been approved by the state’s Attorney General Mike DeWine (R-pictured).

The amendment language approved by DeWine Monday would also keep clergy from being forced to perform a same-sex marriage. The language goes next to the state ballot board for review.

The group FreedomOhio is seeking to repeal and replace Ohio's 2004 prohibition on gay marriage.

DeWine's decision is not related to a federal judge's decision Monday ordering Ohio authorities to recognize the marriages of gay couples performed in other states.

Gay rights groups in the state are hoping to put the gay marriage question back in the hands of voters as early as this November.

A poll in February indicated that support for marriage equality in Ohio has hit the 50% mark.