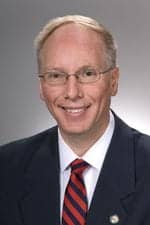 Now, an Ohio lawmaker is calling for Black's impeachment, the Cincinnati Enquirer reports:

"In an epic display of arrogance and incompetence, Judge Black announced that he will require the people of Ohio to disregard the Ohio Constitution and force the recognition of 'homosexual marriages' performed outside of Ohio," state Rep. John Becker's office said a statement. "He persists in allowing his personal political bias to supersede jurisprudence."

Becker, R-Union Township, said Black's ruling would violate both the Ohio Constitution and the U.S. Constitution.

…Becker has introduced a resolution in the Ohio House that would call on the House of Representatives to begin impeachment proceedings against Black. The measure has not yet received a hearing in a House committee, and even if it passed, it would not have the power to require any action from Congress.

Becker called for Black's impeachment last September when he ordered the state to recognize the marriage of John Arthur and Jim Obergefell on Obergefell's death certificate.