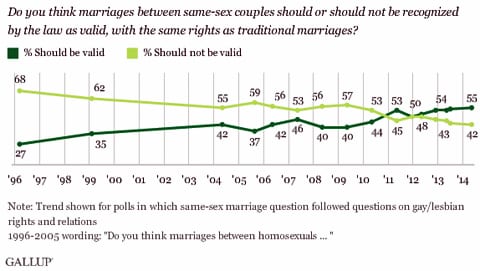 According to a new poll from Gallup, support for gay marriage is at an all-time high:

Americans' support for the law recognizing same-sex marriages as legally valid has increased yet again, now at 55%. Marriage equality advocates have had a string of legal successes over the past year, most recently this week in Pennsylvania and Oregon where federal judges struck down bans on gay marriage.

And the demographic differences continue:

Among the most dramatic divisions in opinion on the issue are between age groups. As has been the case in the past, support for marriage equality is higher among younger Americans; the older an American is, the less likely he or she is to support marriage for same-sex couples. Currently, adults between the ages of 18 and 29 are nearly twice as likely to support marriage equality as adults aged of 65 and older.

Opinions also differ dramatically along party lines. Democrats (74%) are far more likely to support gay marriage as Republicans are (30%), while independents (58%) are more in line with the national average. Though Republicans still lag behind in their support of same-sex marriage, they have nearly doubled their support for it since Gallup began polling on the question in 1996.