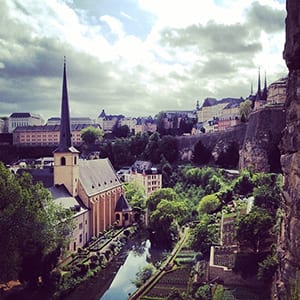 Luxembourg, the small Grand Duchy that puts the “lux” in “Benelux”, is on track to legalize gay marriage by the end of 2014. Justice Minister Félix Braz announced earlier this year that the government would vote on a same-sex marriage bill this summer. The legal affairs committee in Luxembourg’s parliament Wednesday approved the proposed bill–n°6172A–which will now face a vote before all of parliament sometime “after the Pentecost holidays and before the summer”, the Luxemburger Wort reports:

The bill, which also includes reforms on other aspects of family law, was first introduced at the Luxembourg Chamber of Deputies in May 2012, and has taken over two years to pass to a vote in parliament.

The Luxembourg State Council, however, ruled that this was discriminatory and threatened to withhold approval should closed adoption not be made available to same-sex couples also.

Luxembourg, whose Prime Minister Xavier Bettel is openly gay, would become the 9th EU nation to legalize same-sex marriage if the bill is approved, joining the Netherlands, Belgium, Spain, Sweden, Portugal, Denmark, France and the UK.