Michigan Governor Rick Snyder said on Thursday that he would like the legislature to update Michigan's civil rights law to prohibit discrimination because of sexual orientation or gender identity, the AP reports: 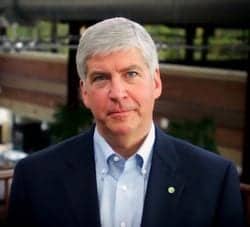 "I don't believe in discrimination," the Republican governor told reporters at the Mackinac Policy Conference, the Detroit Regional Chamber's annual meeting for more than 1,500 business, political and civil leaders. "It's a healthy thing for the Legislature to look to take it up as an issue sometime this year."

He stopped short of specifically backing an update of the 1976 Elliott-Larsen Civil Rights Act, but his request that the GOP-led Legislature debate legislation late this summer or in the fall was seen as a positive signal by advocates. Snyder's comments — his strongest to date — came the same day that Chrysler, other companies, the Detroit Regional Chamber and the Grand Rapids Area Chamber of Commerce joined the Michigan Competitive Workforce Coalition, a group created this month to lobby to amend the law.

Snyder had said he was open to adding gays and lesbians to the state's protections back in December.

Snyder speaks another language when it comes to marriage, however.

In February he asked a judge to rule in favor of the state in a lawsuit filed by five same-sex couples demanding domestic partner benefits. And after Michigan's gay marriage ban was struck down in March, Snyder said the government would not recognize the marriages.

He has been an expert dodger when it comes to expressing his personal views on both topics.