First, let's briefly review the opinion. There were three elements to Judge Jones's opinion, all of which you will remember from previous columns. 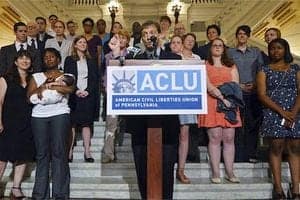 Baker v. Nelson was a summary dismissal of an appeal from a Minnesota Supreme Court decision that said that Minnesota law did not allow gay couples to marry and that such a law did not violate the Federal Constitution. When the Supreme Court shoots down a "summary dismissal," it is almost like ignoring it, or saying that the case does not raise any issue for a federal court to address. Judge Jones said Baker is no longer good law. Significant doctrinal developments since Baker, which was decided in 1971, have changed the landscape of minority and gay rights, in general, and marriage rights, in particular. There was no such thing as intermediate scrutiny in 1971. Antigay discrimination did not even need a rational basis until 1996 (Romer v. Evans). And, until Lawrence v. Texas in 2003, gays were still presumptive criminals. Most importantly, Windsor proved that gays marrying raises substantial federal questions.

2. Due Process guarantees an individual the right to marry.

Judge Jones noted that the Supreme Court had found that the right to marry was fundamental many times and that the right that the "courageous" plaintiffs were seeking was not a new right, but the same right as anyone else who wants to marry the person he or she loves.

The fundamental due process right to marry is not based in the heterosexual person; it is based in the individual, whatever his or her sexual orientation. And just because tradition and custom has restricted marriage to between one man and one man, that is no reason to continue discrimination. If it had been a valid reason, marriage rights would have never evolved to include those who wanted to marry persons of a different race.

Judge Jones went on to find that there are actually two due process rights here: the right to marry and the right to remain married after crossing state lines. The marriage right would mean nothing if it could be taken away by a work trip or a vacation or a trip to grandma's house. As a result, Pennsylvania's statutes banning gays from marrying and refusing to recognize out-of-state marriages were unconstitutional.

3. Antigay discrimination merits heightened scrutiny and the ban on gays marrying violates Equal Protection under that, or any, standard.

None of the purported justifications for this ban — optimal parenting and promoting procreation — met this standard. But there can be no connection between the ban and these ostensibly important objectives. Judge Jones joins the 14 federal or state judges who have struck down bans on same-sex marriage, all of whom have found no legitimate connection between the law and the supposed purposes.

Judge Jones is also one in a long line of conservative and Republican-appointed judges who have struck down bans on same-sex marriage. Marriage equality not only resonates with conservatives, it also is so obviously contrary to our constitutional tradition that both liberals and conservatives can agree that the bans must go.

But his conservatism did shine through toward the end of his opinion.

To Judge Jones, and to the justices in the conservative majority that eviscerated the Civil Rights Act and allowed Michigan to ban considerations of race in admissions, our country's wretched history of discrimination is over. In a way, they're right. We no longer have laws that designated "white only" restrooms and we no longer have laws that explicitly say "women cannot vote." But we do gerrymander our districts to dilute minority votes. Conservatives make it exceedingly difficult for immigrants to vote. We still allow employers to fire someone simply for being gay. We employ many tools to make our ultimate motive — discrimination — hidden from view. We delude ourselves when we say discrimination is a thing of the past. It's not. It's just more insidious, more sneaky, more hidden today.

Judge Jones's toss away line may be of little moment. It is entirely possible that he simply meant that the days of the law approving of "separate but equal" as true equality are over. But it does suggest a greater lesson: Our string of marriage equality victories should never obscure the fact that LGBT Americans are still the victims of hate, homophobia, and institutional discrimination in many ways. Just being able to get married is not the end of the fight; it is the beginning of a long journey.