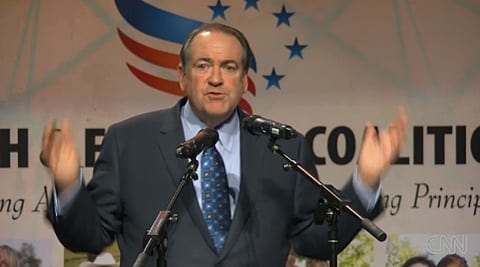 Mike Huckabee is launching an attack on Houston Mayor Annise Parker’s proposed non-discrimination ordinance protecting the city’s public and private employees from discrimination based on their sexual orientation and gender identity, with Huckabee making the baseless assertion that the proposal is “unsafe for women and children.”

“Contact, either by email or phone, every council member and the mayor, no matter where you live in Houston or in the greater metropolitan area. Respectfully state that voting for this ordinance will take away your rights to live what you believe, will be unsafe for women and children, will adversely impact local businesses, will clog our courts, and will unnecessarily spend our tax dollars. Tell them as an elected representative of the people, you expect them to vote Against This Ordinance.”

And with the ordinance set to receive a vote by the city council today, Huckabee is also planning a rally and press conference outside city hall at noon so that council members pay attention to those who “believe in God’s definition of human sexuality…male and female, and believe in common moral decency.”