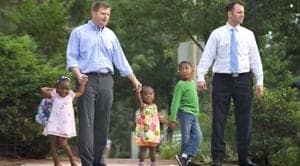 The 2013 American Community Survey results, which will be reported in September, will mark the first time the census integrates an estimated 180,000 same-sex married couples with statistics concerning the nation’s 56 million families. Until now, they had been categorized as unmarried partners, even when couples reported themselves as spouses.

Because of the large disparity between the number of gay and straight married households, combining the two is not expected to have a significant effect on the statistics that scholars and planners use to analyze how families are changing. Its significance is largely symbolic of the growing acceptance of gays in American society.