Emotions run understandably high. The law firm’s offices are a revolving door of teary testimony and raucous laughter. White and Cotner pair scenes of Perry’s raw speech on the aggression she faces each day (and why she is stronger for it) with a drawn-out, serious cross examination of Stier that ends with a solemn-faced-turned-hilarious recitation of her inconsequential “About Me” section on Facebook (as though it should mean something when she takes the stand). In each instance, the plaintiffs are met with warm support from their attorneys; Olson in particular seems to love long hugs. Lawyers and the profession they practice so often seem cold, but Cotner and White are invested in seeking out the tenderness behind this case. 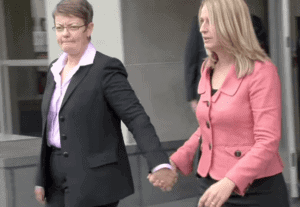 The depictions of the trials themselves vary based on whether cameras were allowed into the courtroom. The first trial, to which the film devotes the most time, consists of the plaintiffs and attorneys reading transcripts from that day, a narrative device which quite evocatively showcases their eloquence in the face of oppression. The directors had footage from the appeals trial with which to work, and audio of the Supreme Court justices from the final trial; still, they consistently refer back to the plaintiffs and attorneys directly, utilizing the tension that those involved felt in order to build the audience’s anticipation.

That anticipation leads to the sweetest moments, of course: the victories. One after the other, Boies, Olson, and the plaintiffs win the trials, fueling scenes of cathartic release. No moment reveals the happy break from tension so much as the the plaintiffs’ dual marriages. One panelist at the talkback described how the film’s “story is told by the expressions on people’s faces.” One look at Zarrillo and Katami’s tear-stricken cheeks says more about the fear and pain of a long-fought battle, finally released in a moment of pure joy, than words could describe. 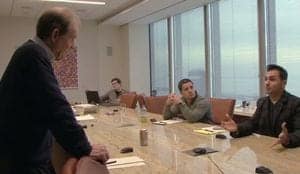 The Case Against 8 is not a perfect film. There are a few too many comic bits involving Boies and Olson, and we do not spend enough time at the Supreme Court. And though the filmmakers do an excellent job at crafting dramatic tension from a subject whose ending is a foregone conclusion, one cannot help but feel that the tone, so insistently hopeful about (and focused only on) marriage equality as “the gay issue,” is slightly passe. The film’s Prop 8 focus is momentous but cannot match the exhilarating speed with which states are deciding on gay marriage bans, or the importance of ENDA, LGBT homelessness, and health-based issues (often ignored in mainstream gay media). It makes it all the more clear that White and Cotner’s filmmaking, like the legal process, was constantly shifting, moving toward an unknowable outcome glimmering in the future.

This uncertainty, while difficult, also makes for that ultimately cathartic ending, and what Ryan White described as a “bittersweet” postscript, in which the number of states still seeking marriage equality is revealed. This statement, like the outcome of The Case Against 8, does not shock or add to on-going discussions surrounding the gay rights movement. The film surrounding it, however, proves to be an undeniably worthwhile and intriguing look inside the case that revved that movement up.

The Case Against 8 will premiere on HBO on June 23rd.

For now, check out the trailer and the film's website to find screenings near you.

Previous Post: « Jonah Hill on Anti-Gay Slur: ‘What I Said in That Moment Was Disgusting’ — VIDEO
Next Post: Adore Delano Discovers She’s Not Alone in the Relationship in ‘I Adore U’: VIDEO »