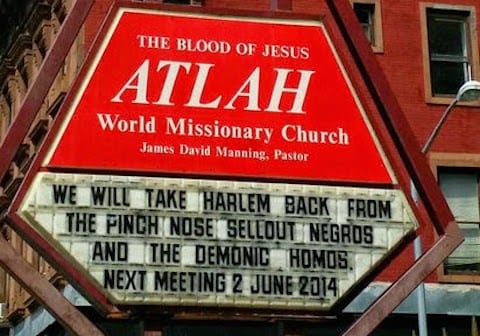 Harlem's ATLAH World Missionary Church – the one run by "stone the gays" (but not really) pastor James David Manning – has put up a new sign on their marquee condemning "pinch nose sellout negros" and "demonic homos."

It's a remarkable coincidence – or not – that the church is right next to the Apollo Theatre, which is presently giving tribute to the late Maya Angelou. Also remarkably (non)coincidental, as Joe Jervis points out, is that the June 2nd meeting advertised is the night of Harlem's newly-opened Ali Forney Center's rally for more beds for homeless LGBT youth.