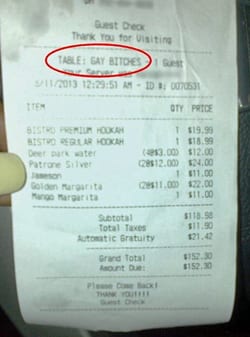 Amira Gray, whom Lambda is representing, says she went to Bistro 18 in August of 2013 with some friends and, after receiving terrible service from the wait staff, says she was "extremely hurt, embarrassed and upset" at then having received the receipt with the message.

When my friends and I saw the receipt, we were humiliated and embarrassed. We went in planning to enjoy Bistro 18 just like everyone else in the hookah bar that evening, but it turned into a disturbing experience. I am standing up for my friends and me because I don't think anyone should have to go through that.

Gray added that a friend of hers brought the receipt to the manager who "snatched" it and brought back a new one with no anti-gay slur.

In the complaint, Gray said, "I believe I was denied the full and equal enjoyment of the goods, services, facilities, privileges, advantages and accommodations of Bistro 18 based on my gender identity (transgender woman), gender expression, perceived sexual orientation, and personal appearance, as well as my association with friends of mine who are gay or may have been perceived as lesbian or gay, in violation of D.C. code 2–1401.31."

Discrimination against LGBT customers is a widespread problem that often goes unaddressed in businesses across the country. That this happened in Washington, D.C., where LGBT people have strong protections from discrimination on the basis of sexual orientation, gender identity, and personal appearance, points out the importance of ensuring existing laws are enforced. By standing up for herself and her friends, Amira is taking a stand for all LGBT people who are targeted by businesses for unequal treatment because of who they are.