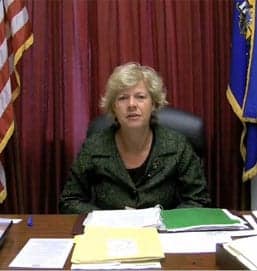 “I am very pleased that Judge Crabb has followed the lead of courts across the country, including the United States Supreme Court, and fully stayed her ruling. By staying this ruling, she has confirmed that Wisconsin’s law regarding same-sex marriage remains in full force and effect. The state and all of its agencies and subdivisions must follow and enforce Wisconsin’s marriage law.  County clerks do not have authority under Wisconsin law to issue same-sex marriage licenses.  Judge Crabb’s stay makes this abundantly clear."

“I believe that we owe it to the next generation to give them a Wisconsin that is more equal, not less equal. The Wisconsin I know deserves better than a Governor defending discrimination and an Attorney General prosecuting progress. Wisconsin should be a place where every family’s love and commitment can be recognized and respected under the law. It is time for Governor Walker and Attorney General Van Hollen to stop standing in the way of freedom, fairness and equality for all Wisconsinites. Love is love, family is family, and discriminating against anyone’s love, against anyone’s family, is just plain wrong.”