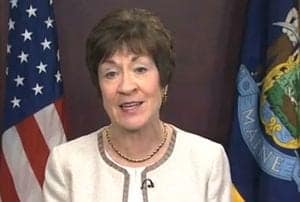 “A number of states, including my home state of Maine, have now legalized same-sex marriage, and I agree with that decision,” Collins said in response to a question from the BDN.

Collins' spokesman Lance Dutson confirmed to the paper that she was announcing her support for same-sex marriage for the first time:

He said the senator hasn’t spoken publicly on the issue previously because she believes it is the voters of each state — not U.S. senators — who should make the decision on marriage equality.

“What she has consistently said is she doesn’t want to get involved in state-level referendum issues. She’s a U.S. senator, and she stays within the purview of her office,” Dutson said. “But when asked [Wednesday] about her personal stance on this issue, she’s said she supports it.”

Collins, long thought to personally support marriage equality, was silent at times when Maine needed her voice the most – during the tough campaigns to legalize it in the state.

Collins support came several hours after her reelection campaign was endorsed by the Human Rights Campaign, and her lack of a position on the issue was pointed out by her opponent, Shenna Bellows, the former ACLU of Maine director.

“My opponent’s voice on marriage equality could have made a real difference in 2012, when this was up for a vote in Maine,” she said. “At that time, I was organizing Republicans for the Freedom to Marry, and we invited Susan Collins to endorse the campaign. She declined.”

“On the eve of the anniversary of the United States Supreme Court’s landmark ruling in favor of federal civil marriage recognition for committed same-sex couples and the day after Congressman Richard Hanna’s victory over a GOP primary opponent who challenged him because of his support for marriage equality, it seems the dam has finally broken: from local legislators to United States Senators, Republicans around the country are coming to the common-sense conservative conclusion that marriage equality strengthens society and is no threat to religious liberty,” Log Cabin Republicans Executive Director Gregory T. Angelo said. ”As a longtime ally of Log Cabin Republicans who championed repeal of the flawed ‘Don’t Ask Don’t Tell’ policy and most recently the Employment Non-Discrimination Act, Senator Collins’ declaration of support for civil marriage equality is the latest milestone in a career that has exhibited bold and unwavering support for the LGBT community.”