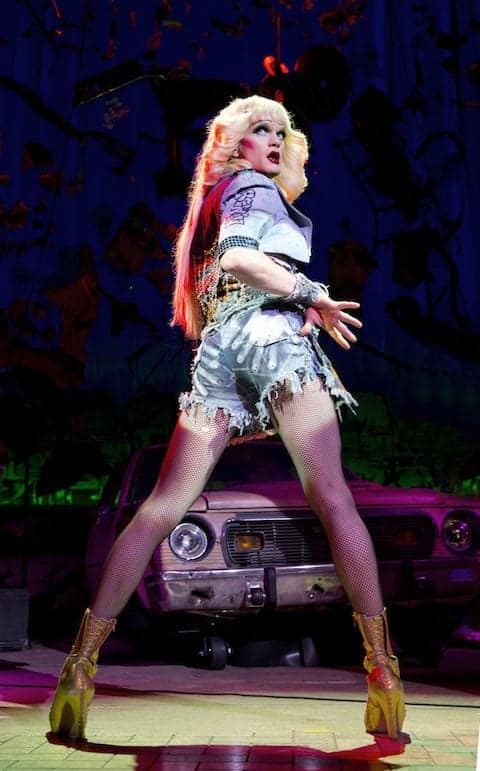 Between Hugh Jackman’s dance belt (or lack thereof) and a performance by Neil Patrick Harris in drag teasing everyone from Sting to Samuel L. Jackson, it was a mighty gay time at the Tony Awards Sunday night, which saw downtown cult favorite Hedwig and the Angry Inch win big for Best Revival of a Musical and collect acting prizes for its stars Mr. Harris and Lena Hall. 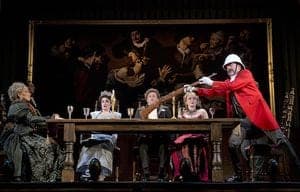 Comedic romp A Gentleman’s Guide to Love and Murder was the evening’s other big musical winner, taking home both Best Musical and Best Director as well as awards for its book and costumes. Honors for the only nominated musical with an entirely original score proved affection among voters for well executed, traditional-leaning musical theatre.

Otherwise honors were mostly spread among a number of shows, with several big acting wins going to plays and musicals that were unrecognized in other categories. For her star-making turn as Carole King in Beautiful, Best Actress in a musical went to Jessie Mueller, who made history both by performing with Ms. King on stage and breaking into the running man with Mr. Jackman in the aisle. The Best Actress in a play award went to Audra McDonald, who also made history by becoming the first actress to win in all four acting categories, for her turn Billie Holiday in Lady Day at Emerson's Bar and Grill. 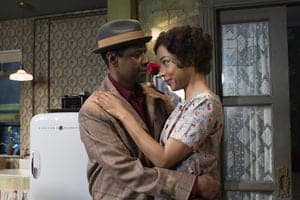 This spring’s acclaimed revival of Lorraine Hansberry’s A Raisin in the Sun was another big winner, taking home the award for Best Revival of a Play, plus nods to director Kenny Leon and featured actress Sophie Okonedo (though Denzel Washington, not nominated for his work in the show, was nowhere in sight). Raisin’s strongest competitor in the revival category, Shakespeare’s Globe production of Twelfth Night, took home a featured actor award for Mark Rylance as Lady Olivia.

Best Actor in the play category was another made famous on the small screen, Bryan Cranston for his portrayal of LBJ in political drama All the Way, which also took home the award for Best Play. A new approach to presenting that award, with each of the nominated playwrights introducing his work, inadvertently served to highlight the lack of diversity in the category. While women were underrepresented in creative categories across the board (particularly compared to last season), African American artists were very well recognized, including James Monroe Iglehart for his athletic performance as Aladdin’s genie. 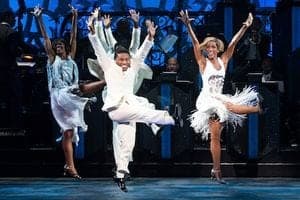 Tony host Hugh Jackman showcased his song and dance skills throughout, hoofing with the cast of nominated musical After Midnight (a winner for Best Choreography by Warren Carlyle), and heading into the audience to serenade the Best Actress nominees. But maybe his most rousing (and certainly most bizarre) number of the night teamed Mr. Jackman with T.I. and LL Cool J in a rap rendition of a song from The Music Man (maybe there’s a revival on the horizon?).

It was one of several attempts to draw more viewers to the telecast and potential ticket buyers to Broadway and future Broadway, including shows still in the works like Sting’s The Last Ship and a musical adaptation of Finding Neverland (which won’t be on Broadway for two years, and is not very likely to star Jennifer Hudson). Multiple shout-outs to leading regional theatres and about the importance of teachers, mentors and arts education also struck an inviting chord—though perhaps no one was more inviting than Alan Cumming singing the opening number to Cabaret. Hugh Jackman was really gunning for that nipple glitter trend.

Check out a list of all the winners HERE.