The U.S. Supreme Court denied a request from the National Organization for Marriage (NOM) to halt gay marriages in Oregon, The Oregonian reports: 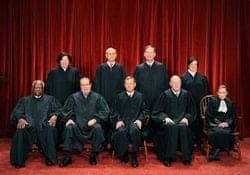 In a terse, one-sentence order, the court rejected a request by the National Organization for Marriage to put on ice the May 19 federal court ruling allowing gays and lesbians to marry in Oregon.

Justice Anthony Kennedy, who rules on emergency cases in the western region of Oregon, referred the issue to the full court, which then declined to get involved in the Oregon case.