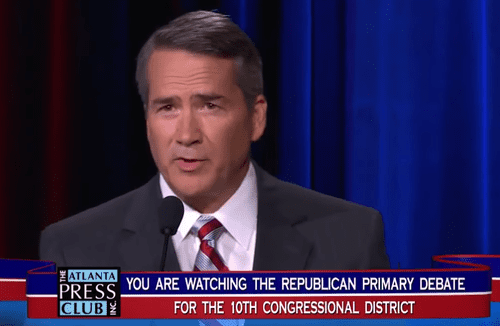 We've mentioned Southern Baptist pastor Jody Hice once before, addressing his lunatic theory that gays as a community recruit and sodomize young children. Evidently the constituents in Georgia's 10th district not only don't have a problem with his lunacy but actually endorse it as Hice won the Republican primary, and will likely win the election this coming fall.

If he goes on to replace his predecessor Paul Broun, Republican congressmen are going to have quite the time trying to salvage what little they can of the GOP's pretty thoroughly wrecked image once Hice starts going on about how Islam doesn't deserve First Amendment protections and it's ok for women to enter politics so long as their husbands gives them permission.