Reality show star Todd Chrisley of USA's Chrisley Knows Best has had to field gay rumors in the past, notably in a piece for People Magazine this past March. In an interview with TheWrap, Chrisley put the rumors to rest: 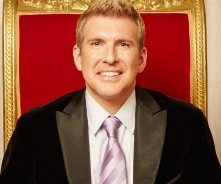 A somewhat perplexing choice of words that hints at bisexuality, but given Chrisley's acceptance of gays and the entire family's participation in the NOH8 campaign, it's doubtful that he's a closet supporter of conversion therapy, so hooray for another celebrity ally.

Chrisley Knows Best will resume this fall for its second season.

Previous Post: « Hobby Lobby and the Democrats Who Want to Fix It
Next Post: Why The Brain Is In The Head: VIDEO »