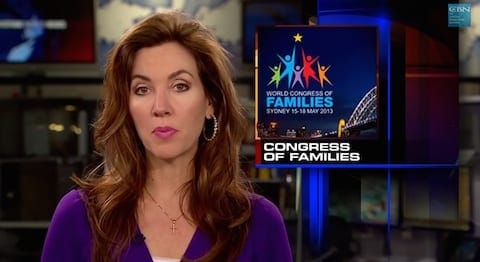 Anti-gay hate group The World Congress Of Families (WCF) intends to bring its annual convention to Salt Lake City in 2015.

The Illinois-based coalition of hate groups, which opposes homosexuality and abortion, claims to affirm and defend “the natural family as the fundamental unit of civilizations, thus renewing a stable and free society.  [The organization] is a practical effort to lead the international pro-family movement and build greater understanding and encourage new networks and initiatives among natural family advocates at the national and international levels.”

Last year, the WCF reserved a meeting room at the Dirksen Senate Office building, until it was shut down by Senator Mark Kirk (R-IL). However the meeting, billed as a discussion of “what can our pro-family legislators learn — positively and negatively — by studying our colleagues’ actions abroad," was later rescheduled at a House office building thanks to Speaker John Boehner.

According to The Sacramento Bee, the WCF coalition, which includes Focus on the Family and Concerned Women for America, aims to bring together “people of different religions and ethnicities to promote the "natural human family.” The coalition describes the “natural human family” as one man and one woman raising children with love and discipline.

Conservative Utah-based think tank The Sutherland Institute put in the bid and is leading the event planning, according to WCF vice president and managing director Larry Jacobs.

Utah has been a focal point in the fight for same-sex marriage in recent weeks, following the Tenth Circuit Court of Appeals decision to strike down the state's gay marriage ban.