Ryan T. Anderson, a newly minted fellow at the Heritage Foundation, is making the rounds with the organization's latest attempt at explaining its opposition to marriage equality. 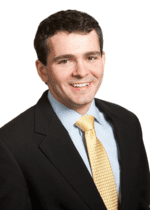 Anderson, unlike some of Heritage's more high-profile ambassadors, has attempted at making a name for himself as a conservative who relies on logic as the basis for his discriminatory beliefs. As calm and collected as he may be in his explanations, however, his "legal" reasoning is somewhat suspect.

In a video that the Heritage Foundation posted to its website last week, Anderson laid out the thought process behind his assertion that legally married same sex couples should still be denied marriage's legal protections.

"The reason that you should not have the option of filing a joint tax return is that you can't get married, given what marriage is."

He explained to a married gay man during the speaking event at Stanford University. "You can be issued a marriage license in the state of California, but you can't actually get married. What you're asking us to do is to redefine marriage to include the adult relationship of your choice."

To recap: in Anderson's view, semantic disagreements about the definitions of marriage trump solid legal standing.

Watch Anderson demonstrate his peculiar "legal" acrobatics AFTER THE JUMP…