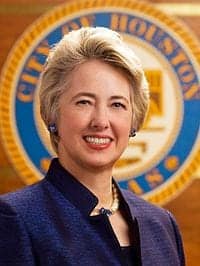 For LGBT people in Texas, there may be a major hurdle in the offing. Lone Star Q reports that opponents of Houston’s Equal Rights Ordinance (HERO) are claiming they’ve gathered enough signatures to put a repeal on the ballot for Houston voters in May. These opponents say 30,000 of the signatures from city of Houston voters have already been validated — nearly twice the 17,269 signatures required to place the repeal on the ballot in November.

At a press conference yesterday at the City Hall Rotunda, supporters of HERO wore red, showing solidarity. Houston Mayor Annise Parker (pictured) spoke at the Rotunda, and she expressed confidence that voters would “soundly defeat” the initiative come November:

The Houston I know does not discriminate, treats everyone equally and allows full participation by everyone in civic and business life…We don’t care where you come from, the color of your skin, your age, gender, what physical limitations you may have or whom you choose to love.  I am confident voters will soundly defeat any challenge to the ordinance.

For now, the nondiscrimination ordinance stands, protecting Houston citizens from housing/commercial/employment discrimination based on sex, race, color, ethnicity, national origin, age, familial status, marital status, military status, religion, disability, sexual orientation, genetic information, gender identity or pregnancy.. Before its establishment in May, Houston was the only major American city to not have citywide protections in such matters for LGBT people.