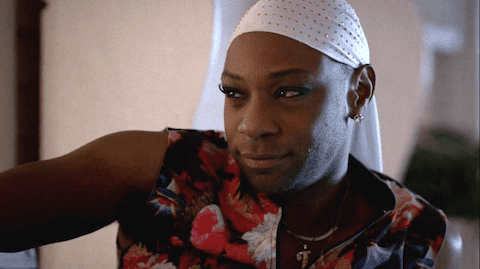 Break out the jungle juice, because folks in Bon Temps are getting lit. (More like Bon Turnt, amirite?) Tonight's episode lacked the action-packed punch of this season's first few installments. Blame it on the a-a-a-a-a-alcohol, I guess.

We did, however, get some nice man-on-man action (albeit with almost no nudity whatsoever, which is notable on this show).

So see who hooked up with whom, and share your comments on tonight's episode, AFTER THE JUMP …

Following last week’s battle royale, Eric (Alexander Skarsgård) and Pam (Kristin Bauer van Straten) are putting the pieces back together at Fangtasia. They’re loading up the travel coffins and getting ready to lay some serious vengeance on Sarah Newlin (Anna Camp). They call in Willa (Amelia Rose Blaire), whose father was romantically involved with Newlin, to see if she’s got any info. Willa, however, is having none of this plan. She’ll give them information, but she is not going with them. In fact, in exchange for what she knows, Eric must release her.

He complies and Willa spills a little T on Newlin’s secret vampire sister named Amber (Natalie Hall). When they arrive in Dallas, she’s not with her sister. Amber does have Hep-V though, and an awful lot of unresolved anger toward Sarah. She tells Pam and Eric that her sister is sure to go looking for their parents at a Ted Cruz fundraiser. Time for Pam and Eric to go full-on Salahi and sneak themselves in. While they’re changing into their Republican disguises, Pam catches a glimpse of Eric’s worsening condition. He’s now stage two. 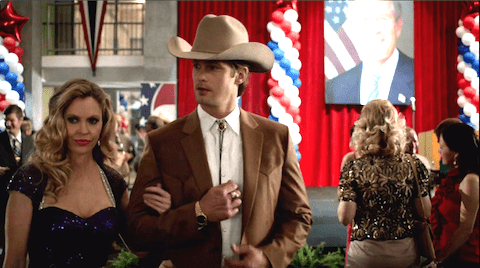 They make it into the fundraiser, but before they can find Sarah, the Yakuza busts into the joint and starts shooting the place up. They kill Sarah's papa, but her mama is in the ladies’ room, where she’s been confronted by Sarah. The Newlin women high-tail it through the halls with the Yakuza in toe. The Yakuza shoot down her mother, but Sarah runs smack into none other than Eric Northman. Before he can take his revenge on Sarah, the Yakuza turn the corner. He slaughters the Yakuza, ripping out the jaw of the man who killed his French girlfriend back in the ‘80s. Did that give Sarah enough time to get away?

Meanwhile, back in Bon Temps, it’s party time. Lafayette (Nelsan Ellis) decided Sookie (Anna Paquin)’s big, empty house needed to be filled with a little love. After all the death, it’s time to celebrate life. So the whole town’s been invited over to La Casa Stackhouse. Everyone’s been instructed to bring some top-shelf alcohol, so you know it’s going to be a ruckus.

Bill (Stephen Moyer), of course, is the first to arrive. He’s not the most social, and spends the majority of the party looking wistfully into middle distance and remembering his experience during the Civil War. (For the record, Bill Compton Civil War flashbacks are the silliest thing on a show full of silly things.) Jessica (Deborah Ann Woll) is also being a party-pooper, standing guard outside. Andy (Chris Bauer) comes outside to remind her that all this punishing herself is just perpetuating the trauma for him as well. All the recent horrors they’ve suffered have taught him carpe diem, no day but today, etc. and so on. Plus, he’s going to ask Holly (Lauren Bowles) to marry him! Yippee! 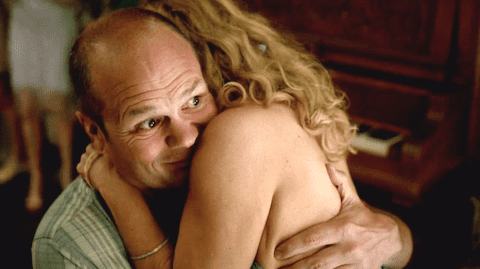 They use Granny Stackhouse’s ring, since Violet (Karolina Wydra) says she doesn’t need Jason (Ryan Kwanten) to give her a ring to prove that he’s hers. (That’s a strong statement, as we’ll soon see.) After a very sweet, stammering proposal, Holly obviously says yes. This gives Sookie an attack of the the feels, so she and Arlene (Carrie Preston) head upstairs to talk about dead lovers. It never gets easier, according to Arlene.

Lettie Mae (Adina Porter) also makes an appearance at the party. Her husband, the Reverend (Gregg Daniel), did not think it was the best idea, what with all the vampire blood and alcohol available, but Lettie Mae was undeterred. She drugged the Reverend with some Benadryl and made her way over. She was able to stay sober through a toast for Tara (Rutina Wesley), but the idea of getting some sweet vamp blood to reunite with Tara was just too tempting. She stabbed Willa in the shoulder, but did little damage. Willa healed and Sam (Sam Trammell) restrained Lettie. 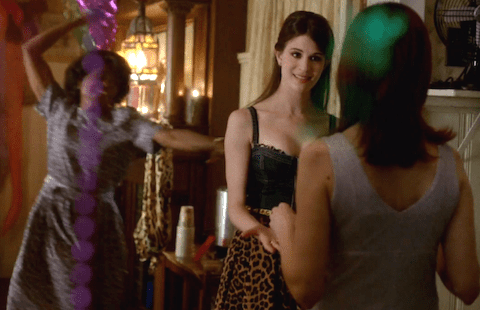 It was a good excuse for Lafayette to leave the party and escort Lettie home. Earlier in the evening he had a heart-to-heart, followed by a crotch-to-butt with James (Nathan Parsons). That’s right, after confirming that the Danny James talked about in his story a few weeks ago actually was a man James was romantically involved with, he and Lafayette finally went at it. Of course, Jessica catches them in flagrante and flips out. She makes Jason rescind James’ invitation to the Stackhouse abode. Jessica and Jason go upstairs to talk. In the midst of their conversation, Lafayette comes up to drop some truth on Jessica: She doesn't love James. She never loved James. She doesn't know him like he does. Then he goes on about how everyone in this town looks at him like a joke before delivering the great line: "Has it ever occurred to you that maybe I want a piece of happiness, too?" 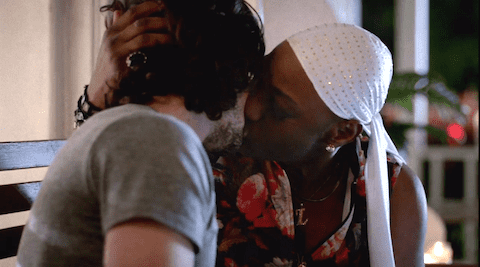 Once he leaves, Jason and Jessica rekindle their romance. While the former flames do their business, Violet overhears from outside the door. I don’t know about you, but Violet is a woman I wouldn’t want to cross, no? Something tells me her revenge is going to leave quite a few bodies in its wake. 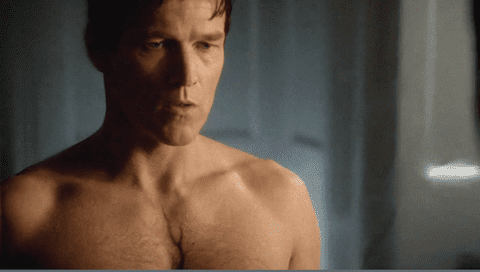 Later that evening, Bill is just soaking in the tub back at his home. He heads to the mirror only to see the early indications that he’s got Hep-V.

Do you think Sarah Newlin got away? Will they find a cure for Hep-V before it claims Eric and Bill? What will Violet do to make Jessica pay?