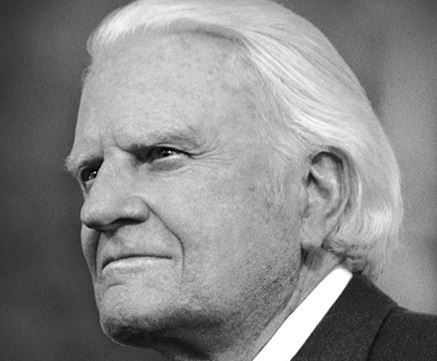 Using old issues of Christianity Today – the evangelical Christian periodical founded in 1956 by Billy Graham – sociologists Jeremy Thomas (Idaho State) and Daniel Olson (Purdue University) have discovered that during the last several decades, evangelical elites have been “subtly but significantly changing their moral reasoning about homosexuality.”

More specifically, the evangelical response to homosexuality has evolved in four different ways over the years:

1. Biblical Intolerance: Dominant approach of 1969-1979. “The Bible says it’s a sin, that’s good enough for me” Evangelicals acknowledge that being gay isn’t a choice (it was seen as a psychological disorder)

2. Natural Intolerance: Emerged in the 1980s. Emphasized natural law, rather than the Bible, as the foundation of public morality and law. Allowed evangelicals to use science (procreation) and medicine (AIDS and HIV) to make moral arguments more palatable for the secular public square.

3. Public Accommodation: Emerged in the 1990s and is the dominant argument today. Homosexuality is a personal sin, but because we live in a pluralistic society LGBT rights should be protected. Marriage, however, remains off-limits to the gays.

4. Personal Accommodation: A recently developed argument that emerged in the 2000s. Continues to remain a minority position. Emphasizes that LGBT rights are about love and respect, not sex. Attempts to push away from morality judgement. The Bible is used to argue for equal rights. 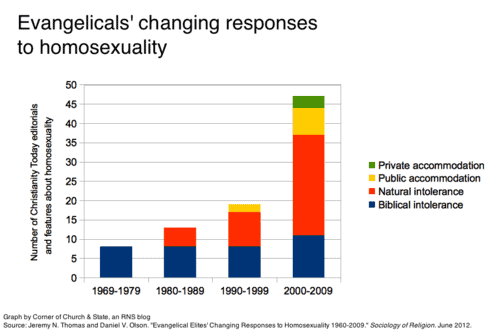 The full study (which you can read here) costs $38 to access, but Religion News Service has a detailed breakdown of the study’s findings that you can view for free.