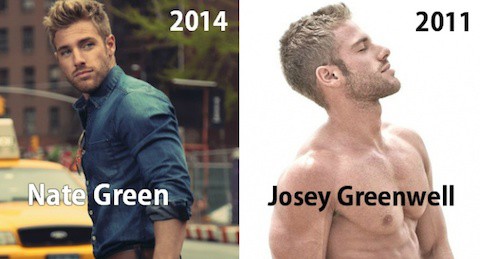 Josey Greenwell was a country musician who made waves by being out and proud, appearing in places like DNA Magazine and on Dr. Phil, gaining attention both for his music and his model looks. Then in January 2013 he vanished. Now, over a year later, enter Nate Green, a ripped, blonde-haired, blue-eyed new country music star who is immensely popular with the 13-24 female demographic…and just so happens to be the new "persona" for Greenwell.

It was all speculation until WeHo Confidential ran a story with confirmations from former bar co-workers and BNA Talent Group representative Josh Robbins, the latter of whom was shown a picture of "Nate" and immediatley said, "Oh, that's Josey Greenwell!"

Given the pigeonholing that tends to happen with gay artists it's understandable why Greenwell chose to rebrand. It's just a shame that the singer who told DNA Magazine, "Music should be about talent and not sexuality, but I'm proud of mine nonetheless," would trade the opportunity to shatter preconceptions for a nice big closet for him and his guitar.

Watch a video of 'Josey' performing at Motor City Pride in Detroit in 2012, AFTER THE JUMP…